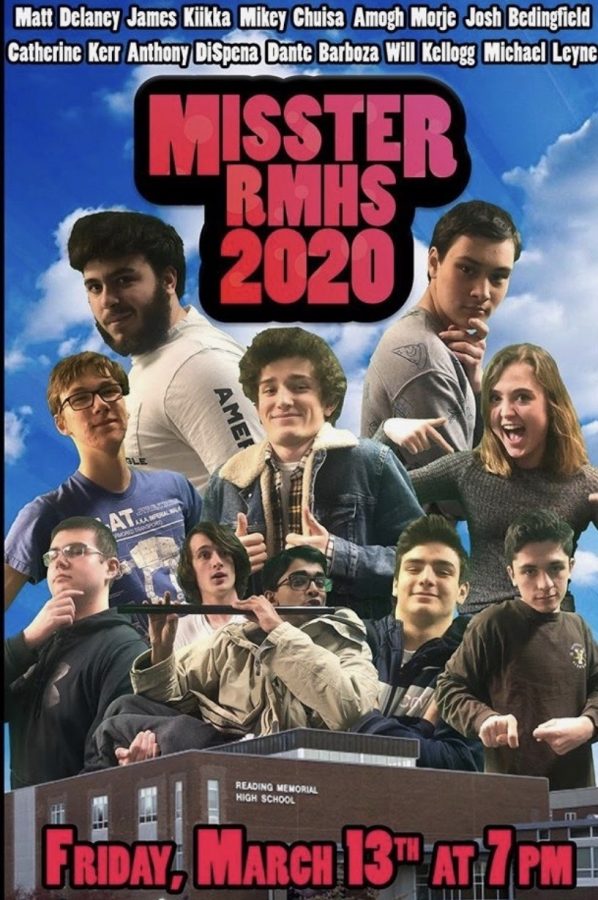 NOTE TO READER:  This event has been postponed due to precautions taken to stem the spread of coronavirus.  Still, you may enjoy reading about what the contestants will perform when the event is rescheduled.

Every year, RMHS hosts a talent show for students to attend, and for some, to perform in. The contestants are chosen by votes from the school, and they get creative liberty to choose the idea behind their skits. These contestants consist of seniors Dante Barboza, Matt Delaney, Anthony DiSpena, James Kiikka, Will Kellogg, Catherine Kerr, Micheal Leyne, and Amogh Morje; and juniors Josh Bedgingfield and Michael Chuisa.  The night will be hosted in the Performing Arts Center at RMHS on March 13th at 7pm by seniors Jeremy Rosh and Bomee Yu, entertaining the crowd between skits. There will also be an intermission with special musical performances. Guest judges, Mr DePietro, Ms Najmi, Sr Binaghi, and Mr Dailey, will be responsible for crowning Misster RMHS 2020.

Although the contestants’ skits may differ completely, they are all excited to see everyone’s hard work displayed, and they hope it will evoke some laughter. A couple of the performers told us what they have planned for their skit and we are excited to share a sneak peak of what the night beholds.  The full skits, and more not mentioned are a surprise, so come join the contestants on March 13th for a night of fun!

Josh Bedingfield is participating in Misster RMHS for the first time this year.  As a current junior, he is excited to participate in such an iconic event and can’t wait to show what he has been working on.  He is most looking forward to seeing everyone be surprised as all the promos and advertisements have the school currently in suspense.  For his act, Josh shares that the entire skit will be live and raw, full of surprises and interesting ideas. He shares that the RMHS Jazz Combo group and junior, Marla Driscoll will make an appearance.  But, that’s all we get to know as this performance will be a secret until the night of the show. Josh leaves us with one hint: “Roses are red, violets are blue, I’m a swag master, and you are too!”

Micheal Chuisa is excited to make his Misster RMHS debut this year as one of the two juniors performing. He shares that the idea behind his skit is receiving an anonymous text from a girl and figuring out who sent it. In his skit, he’ll be showing a video airing around many different places in reading, including Jordan’s Furniture, Columbo’s Pizza, and various random locations. Michael appreciates the help he received in putting his skit together. “Cameron Breslin, Michael Cail, and Doyle Morgan are in my film and helped produce it. Without them, my act would be nothing,” he shared.

As one of the few returning contestants, senior Matt Delaney shares that from his past experience, he has a lot of confidence that “This is gonna be the best year yet.” His skit will be performed live with his friend, senior Zach Barbo. Matt also shares that there may be a guest teacher as well, but who that may be is a surprise. The idea behind his skit revolves around the plot of a cooking show, Matt shares. To find out more and about Matt’s performance, attend Misster RMHS this Friday.

As the only female in the cast, senior Catherine Kerr is excited to make her debut in Misster RMHS. She shares that it is surreal being the only girl and notes that there is “lots of pressure to be funny.” She is extremely excited and is looking forward to seeing everyone’s hard work and time pay off at the show.  Her skit is in the form of a prerecorded video which takes place in her friend’s kitchen, and there are also some scenes filmed in a hotel room. The idea behind her skit is making fun of a food competition show. She also shares that there will be special guests of seniors Katie Stathoulopoulos, Katie Delaney, Dan Chin, and Bomee Yu.

For Senior Will Kellogg, this is his first year participating in the show and looks forward to what the night will bring. Performing his skit live, he’ll be sharing the stage with his close friends Hannah Shapiro, Lily Johnson, and the Evangelista family. Will shares that Mr. Cardillo, a popular substitute teacher at RMHS, will be making a guest appearance as well. His skit will consist of hosts watching TV while skipping through channels to see their own miniature skits in each channel. “I’m looking forward to playing a song of mine. It’s stressful but I think it’s going to turn out ok. I think Matt’s is going to be really good too. I hope you guys have fun, I think it’s going to be great,” Will shares.

A special thanks to the people behind the camera for making the night so special, as well as all the volunteer judges and senior class president Maura Drummey. The tech crew consists of Stage Manager Trevor Kinney, Lighting Designer Ashley Spear, and Sound Board Tech Owen Lannon, among many other student volunteers.

To watch the show and find out who will be crown Misster RMHS, come to Reading Memorial High School on Friday, March 13th starting at 7pm and bring fifteen dollars for entry into a fun and unique once a year experience.