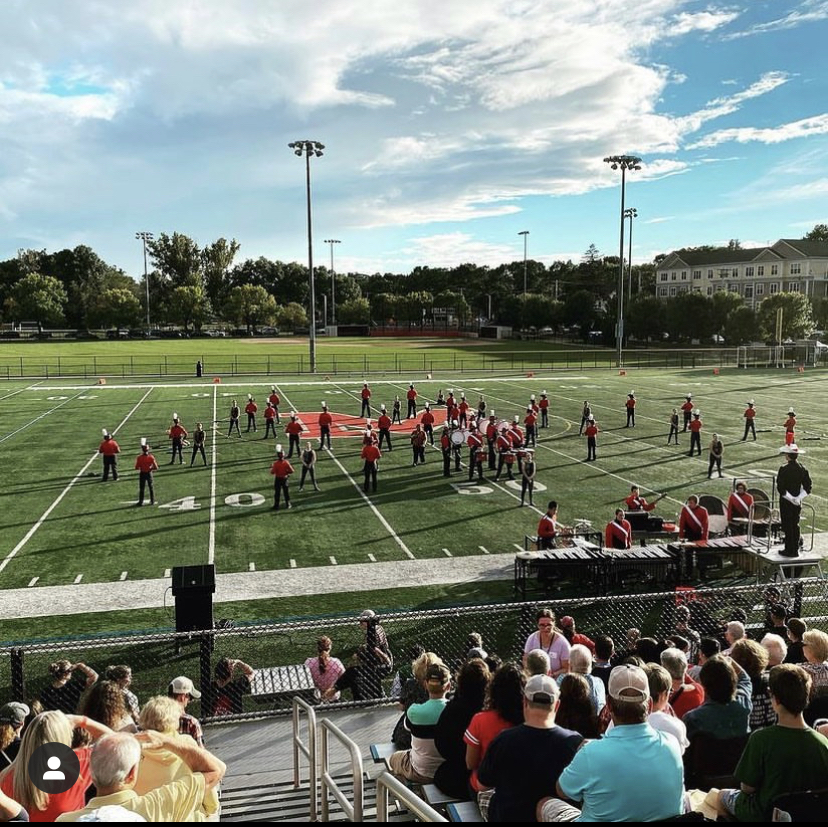 RMHS Marching Band is shown at a recent competition in Melrose.

The RMHS Band recently celebrated their second win this season in NESBA competition with a score of 79.200 out of 100, leaving them undefeated following their win at their first competition the weekend prior.

On Saturday, October 2nd the RMHS Marching Band attended their second competition in North Andover. They ended with a final score of 79.200 out of 100, leaving a decent margin between them and Westbrooke, the second-place band, who had a score of 77.600. Following them were the other teams in their division Medford, Burlington, and Andover. Their overall score was broken into three sections, general effect, music, and visual, all of which they had won. Accompanying their trophy they also came home with an award for best percussion with a score of 79.667 and third in color guard with a score of 74.50. They won their competition the weekend prior with a score of 70.500.

Despite their undefeated record, Band Director Mr. Mulligan explained that they try not to focus too much on winning. “You know we try not to focus too too much on all the competitive parts of it because sometimes we can’t control that. You know it’s not like a lot of other sports where there’s a definite winner and loser. We have judges that it’s a lot of time their personal opinion. Something that went really well or something that didn’t go well. Or they liked the way that the show was designed or they don’t like the way the show was designed.”

Mr. Mulligan expressed that the band still has a lot to work on following last weekend, including getting the sophomores and freshmen up to speed. Last season with COVID the band was not able to compete for anyone besides parents. This left the junior and senior classes as the only ones with experience competing. Uniforms, for example, took a lot of getting used to. Mr. Mulligan went on to say, “When you put the uniforms on everything looks different. So when you are moving around and stuff you know what the person you are supposed to be standing next to looks like. When you are all in uniform, everyone looks the same.”

Drum Major Dionysios Georgopoulos added that he thinks the band is generally in a good place. He mentioned that at the competition last Saturday they had not even completed their show. They finished it at practice on Tuesday to show for the first time in the competition this Saturday in Wakefield.

“I do have a good feeling right now because considering in past years we have usually had the show already completed by now which, in this case, for this Saturday it’s our goal to have music and drill all done ready for our next performance,” Georgopolous explained. “I think we are in a very good place considering the circumstances we were under.”

The RMHS band is nowhere close to done. They have many more shows up through October 31st when Reading will be hosting the finals. Until then, they are planning on working more choreography into their performance and continuing to introduce the freshmen and sophomores to competition life.