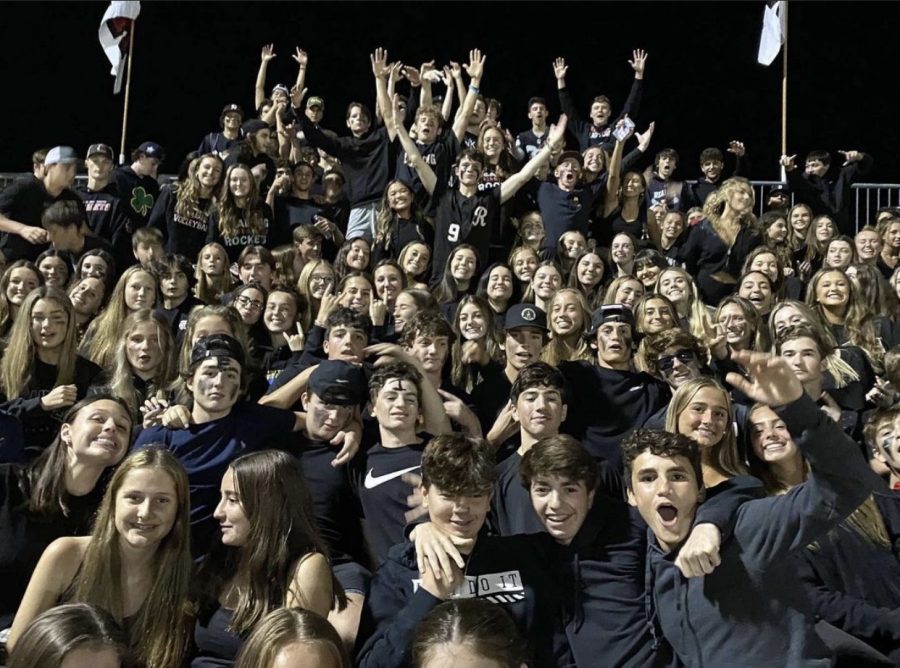 This year the student sections have been large and loud at Rocket sporting events.

The undefeated RMHS football team shared a range of emotions as they approach their Friday night (10/8) game at home against the also undefeated Woburn Tanners.

With both teams having an undefeated record so far, the tensions are high. This will be game five for the Rockets, and game four for the Tanners.

Head Coach John Fiore expressed his confidence he has in his team and staff: “I am super confident in the kids and our staff for how they’ve prepared so far.” He also recognizes the competition and knows that it will be a competitive game. “Woburn is 3-0 and you are what your record says you are so they’re a very good team and it’s something we need to get ready for.” Both teams are coming off big successes with the Rockets coming off a 34-0 win against Belmont and Woburn off a 47-16 win against Arlington.

Different teammates communicated their emotions heading into the game as well. Captain Colby Goodchild (’22) and Captain Thomas O’Brien (’22) are both excited and feeling confident. “I am not super nervous going into this game, they’re a good team, really good running, really good tip-ball, but nothing we haven’t seen before. We’ve just got to execute and play our game and we should come away with a win,” expressed O’Brien. Patrick Duross (’22) expressed similar emotions to O’Brien: “It is going to be a fun one. It’s a rivalry game, and we just have to show them who’s boss.”

Players and staff also feel excited to be home, and all agree that having the home-advantage is a positive momentum shift. “It’s a nice community atmosphere,” said Mr. Fiore. “A lot of Woburn people will come over, a lot of Reading people will come out. Nice and loud and exciting. So that’s the fun part about being home.”

Mr. Fiore was not hesitant to shoutout players accomplishments so far this season:  “Shoutout to our two senior captains right off the bat Colby Goodchild and Thomas O’Brien. Also, Nick Zannino has been playing very well at outside linebacker and the punting duties. Pat Duross has been nothing short of stellar as a tight end and a defensive end, very quietly coming on strong.”

Student sections at football games have been buzzing with energy and excitement so far. Heading into the game against Woburn carrying an undefeated record brings excitement for what the future holds for the Rockets.