RMHS Wrestlers Adapt to Life in a New Season 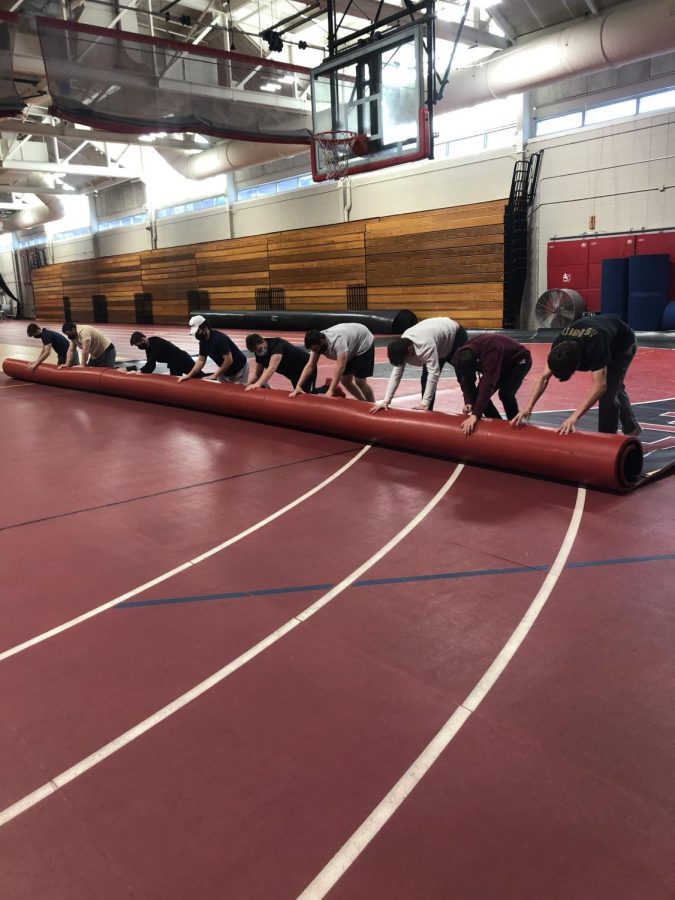 RMHS wrestlers prepare for practice on the main floor of the fieldhouse.

Waiting in the pooled testing line one recent Tuesday afternoon, spring sport season athletes caught a glimpse of something new: classmates rolling out red, glossy mats onto the field house floor. “Oh, yeah…wrestling,” said an onlooker. “But during Covid?”

Because of the pandemic’s six feet apart rule, outdoor sports of medium risk could barely make contact with other players on the field. In the case of field hockey this past fall, the number of players decreased from twenty-two players on the field to fourteen. Higher risk sports like football and winter track were moved to the Fall ll season from February to April.

With the 2019-2020 winter season ending just four days before the world shut down last March, the wrestling team was finally given the green light to compete in the spring 2021 season.

At first glance, wrestling during a global pandemic seems like grave miscalculation. Two people in extremely close contact, all while sweating profusely?

However, the contact between players only lasts, at a maximum, six minutes. Additionally, players must wear a mask at all times. If a mask falls off or is broken in the middle of a match, the referee pauses the match immediately to allow the athlete to reposition their mask. Moreover, all RMHS athletes including wrestlers (with the exception of students who are fully vaccinated) must attend weekly Covid pooled testing. With the designated wrestling room in the upper level of the field house transforming into a classroom for RISE preschool students, the team practices in the first floor of the field house, which allows for more room to spread out and additional fresh air flow. While all these changes seem tedious, Reading wrestlers are energized for the challenge.

When asked if they felt excited for the opportunity to compete despite many less-than-ideal changes, junior Latoya Kibusi, asserted a strong, “Of course.”

Further alterations to the season include the team practicing in specific cohorts. Both Varsity and Junior Varsity athletes practice synchronously, but are separated by weight class into cohorts of no more than four athletes. This means that each athlete wrestles the same three other athletes each practice (with four practices and one meet allotted per week). Senior captain Lucas Laurenza points out, “In a normal year, it is more loose, but it’s not that bad.”

At meets, the team bench remains socially-distanced and athletes sanitize their hands both before and after their match. The referee remains the same distance to the athletes as in a normal year, but does not allow handshakes between the athletes after the match concludes. The Middlesex League allowed for only ten meets this season, a decrease from the approximately twenty meets held during a normal year. These meets are held in a dual-meet style, in which only two teams compete against each other. At home meets, athletes will be allowed to bring two spectators per wrestler to watch, all while socially distanced.

As of now, there is no postseason championship or league tournament scheduled, but the team is hopeful. Athletic Director Mr. Zaya included that the state and league are “in talks” of holding something for after the regular season. Laurenza notes, “Every other sport had a chance” to compete, and it was “out of fear” that the wrestling season has been delayed this long.

In a year of unprecedented firsts, the wrestling team is no exception. For the first time in Massachusetts state history, Reading’s opening meet versus Wakefield was conducted outdoors, on Wakefield’s stadium turf! A landmark event for the state, even the Boston Globe came to report. Wakefield opted to coordinate all of their home meets on the stadium field, but Reading chose to host home meets in the Hawkes field house. According Mr. Zaya, the decision to hold meets in the field house came down to a few key factors. Currently, boy’s and girl’s spring track and field as well as boy’s and girl’s lacrosse occupy both facility turfs in the after school hours.

Additionally, the team of thirteen total wrestlers, a substantial decrease in membership compared to year’s past, would have been responsible for lugging the many heavy mats both to and from the field each time. Coach Craig Murphy, a Special Education teacher at RMHS, joked that while this would have proved to be a sufficient workout for his team, it simply wasn’t necessary when the field house is equally a safe option.

In conclusion, the team is grateful to have the opportunity to compete. Sami Kourbali (‘23) indicated that he sacrificed his first lacrosse season (after having his freshman season cancelled last March) in order to wrestle. Mr. Zaya offered, “I’m not gonna lie…I was thinking 50-50 [that the team would have a chance to compete this year].” Mr. Zaya also included that some Massachusetts leagues opted out of wrestling altogether this year, and that RMHS and the Middlesex League is lucky to have been granted the opportunity.

Patrick Keenan (‘21) captures the overall sentiment of his teammates:  “It’s good.  It’s something rather than nothing.”